As I peeked out the window this morning, the sun was just beginning to shine. It looked like a promising day and I was glad, as we would be walking ten miles around the Breamish Valley.

First things first though: check the Longworth trap for any visitors. Heather retrieved the trap and carefully emptied it into a paper bag. Along with the hay and leftover oats and apple chunks was a bank vole, gazing up at us with its beady black eyes.

If we were carrying out a proper small mammal survey we would attempt to sex the vole and perhaps snip a small section of fur from its back. The purpose of this is for re-trapping, so we’d know if the same vole came back. However, we were just trapping to see what mammals were in the area, so these procedures weren’t necessary. We observed the vole for a little while longer before Heather released it back into the dry stone wall alongside the bothy, where it slipped out of sight in seconds. We also left the remaining food for the vole to feast on – it was only polite.

After eating a hearty bowl of porridge and making sure we had everything packed for the day ahead, we set off across the fields and down to the first plantation. Heather told us the habitat had been classed as “felled”, but there was nothing felled about it now. Trees loomed above us, and with foliage on all sides it felt like we’d wandered into an enclosure at Jurassic Park. My overactive imagination thought the grating screeches we heard were those of Velociraptors, but sadly were just squabbling jays.

I led the group down the hill, taking care over crooked roots and dislodged rocks. I was just negotiating a particularly steep section when Cain called us back. I knew he’d seen something so I rummaged for my telephoto lens while scrambling back up to where the others had binoculars trained at the very top of a large conifer. There was a loud chirruping, and among siskins and chaffinches was a larger finch with a forked tail and an unmistakable bill that had the upper mandible overlapping the lower: common crossbills. There were several up in the tree, and as I zoomed in I saw that a male was being pestered by a begging juvenile, its pale wings flapping ten to the dozen in an attempt to catch its parent’s attention. The male, and another a few branches away, were plucking cones from the tree and holding them aloft like they weren’t quite sure where to put them. It was fascinating to watch such a strangely designed bird negotiate its food. 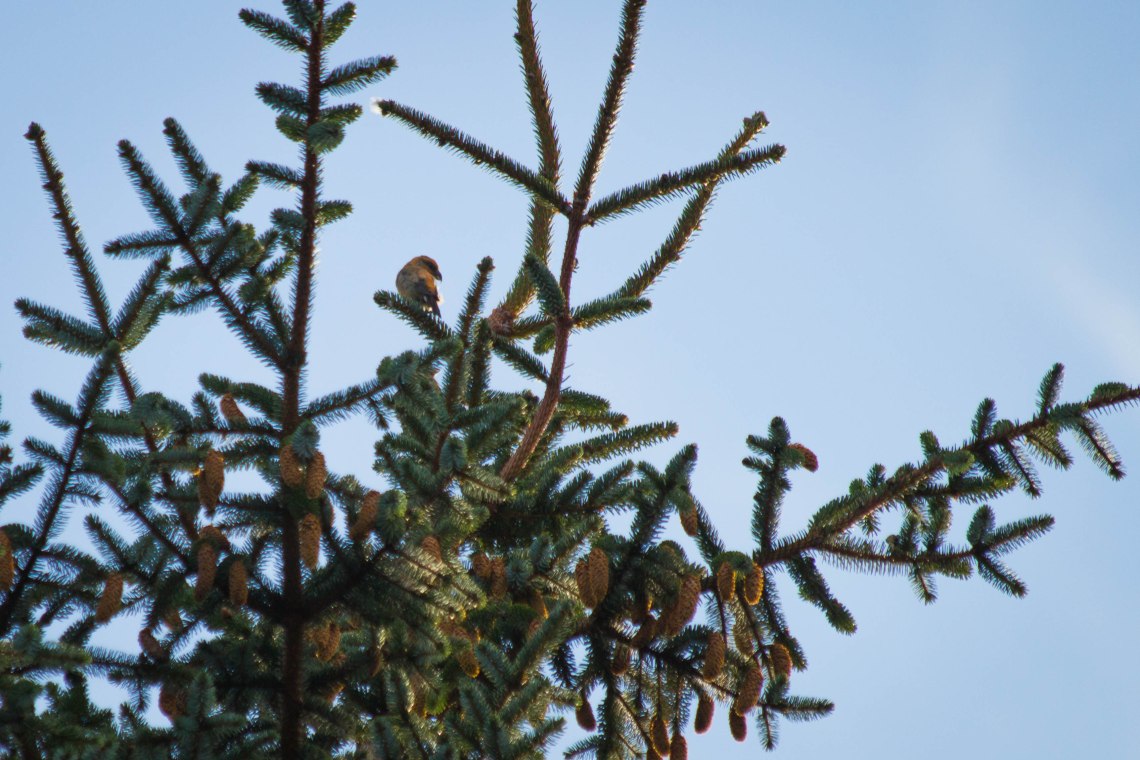 We wandered on, breaking out of the trees and beginning the first ascent of the day. The trail wound through an ocean of bracken, and I soon found myself chest-deep. When I glanced behind me I could only see everyone’s heads and shoulders as they waded through. The resident skylarks joined us, as well as a distant buzzard that I’m sure the skylarks were keeping a close eye on. 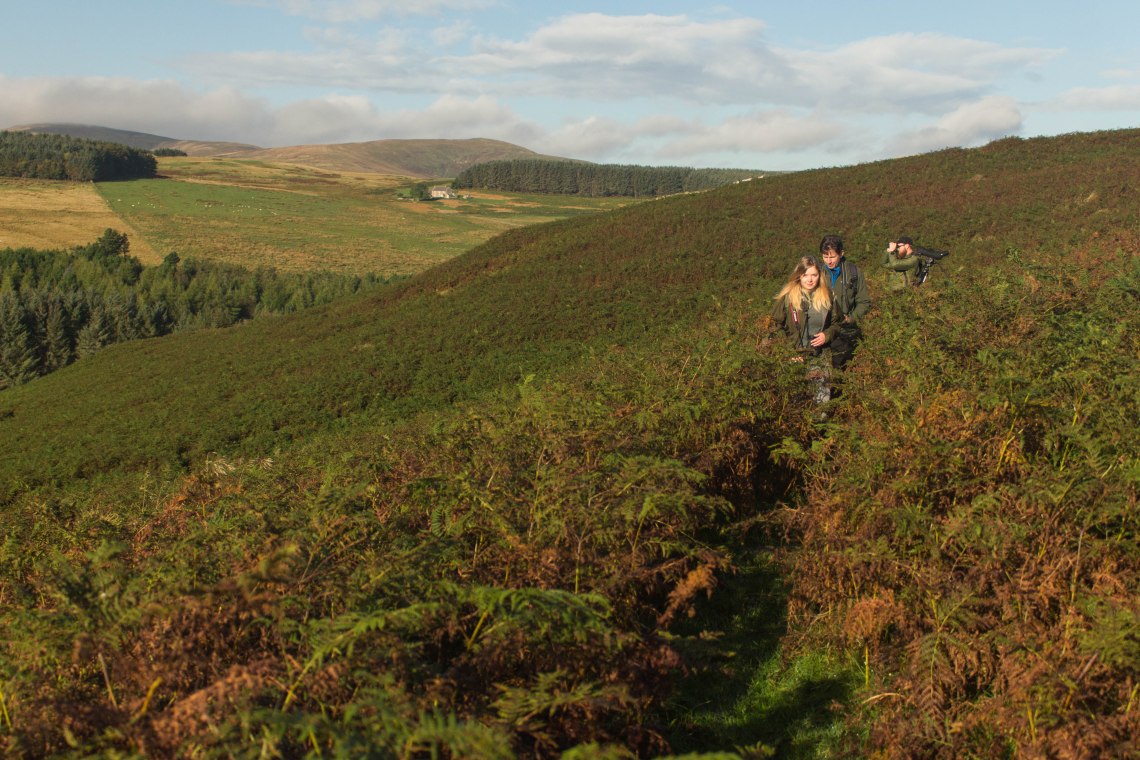 The sun sunk in and out of the clouds as we made our way through the valley, stopping every once in a while to photograph a mysterious fungus or watch a bird through binoculars. By lunchtime, just as my stomach was rumbling for my sandwiches, we arrived at Branton Nature Reserve. The first sound that greeted us was the noisy gabble of greylag geese as they fought for space to sit down on the crowded island. There were dozens of birds here; groups of lapwing, snipe, goosander and moorhen. There was minimal mingling between the species, reminding me of a school canteen full of cliques. Suddenly there was a commotion and many birds took to the air. The source of the panic was a heron, gliding in with broad wings and a curled neck. As he landed with spindly legs dangling, the geese gabbled uncertainly and gave him plenty of space.

We slunk as inconspicuously as we could into the hide and tucked into lunch while keeping one eye on the lake’s activity. A cormorant surfaced a few feet from the window, and paused long enough for a few breaths before diving back down, emerging moments later in a completely different place and with a wriggling fish in its bill, which was swallowed up in the blink of an eye.

Soon it was time to start heading back. It was trying to rain, and as we were making our way back past the village of Ingram it succeeded, so I hastily packed away my camera and bins. Later, once Cain had got a fire going, we’d rested our aching feet and eaten dinner, we pottered into the garden with the bat detector, to see if any bats were passing through. Before we heard any clicks though, there was a flash of white wings and a barn owl swooped out into the open. Shortly after, a second owl appeared some distance from the first, which was even more exciting. We ventured a little further up the hill and the detector started clicking. That evening we heard both common and soprano pipistrelles, and although we were leaving the wilderness behind and heading back home tomorrow, just these two days have been enough to remind me once again how important it is to spend time in nature.