The rain was lashing on the windscreen as we made our bumpy way up the hill to Chesters. Sheep shook their sodden wool and watched the car with quizzical expressions as it grumbled over rocky grass. Before long the bothy came into view, nestled amongst the rolling bracken hills. I was just scanning the ground for darting pheasants when a pair of beady brown eyes made me call out for Cain to stop the car. Slowly reversing, we just caught a glimpse of the hare’s face before it turned tail and scarpered back through the bracken. I saw this as a very good wildlife omen for the rest of the weekend.

After settling in and enjoying some lunch, we headed through the Breamish Valley to meet the expeditioneers. I had a scan with the binoculars and spotted a kestrel hovering, drifting and hovering again. Heather told me she’d seen a pair of ravens swooping around yesterday, so it would be fantastic to hear some ‘kronking’ this weekend.

The weather couldn’t seem to make up its mind. Rain drummed on our heads one minute, then the sun was shining and turning the hills gold. Skylarks zoomed above, filling the air with their high-pitched chirruping, while pheasants screamed down in the valley, darting in and out of view like a Scooby Doo villain chase.

Once the expeditioneers had unpacked, we headed out for a wander. A breeze whistled in the grass but the sun still fought with the clouds for a good view. We ducked into the nearest conifer plantation to see if there were any good spots to set a camera trap. After following a trodden track that trailed through the trees – a sure sign that there were creatures using this route, perhaps a group of roe deer or even a badger – we positioned the trap with a good vantage point down the trail.

Further on through the plantation was a Scots pine peppered with deep, spherical holes. The tree was dead, and had become the perfect sculpting project for great-spotted woodpeckers, who had transformed it into a wooden honeycomb. It was extraordinary to see tough, dead bark being carved and moulded so easily by blackbird-sized creatures. Although we did hear their sharp ‘kik’ call somewhere in the plantation, we didn’t meet any possible culprits, so couldn’t be sure if it was the work of a single bird or perhaps multiple competing for such a valuable pecking post.

The sun was slowly setting. As the light faded, a hazy glow settled over the Cheviot Hills, illuminating the uppermost branches. Every colour was intensified; russet orange, army green, lime green, all blending together and criss-crossed with conifer needles. Spots of bright light broke through gaps in the canopy, playing tricks on my eyes when I thought a hyper-lit brown leaf was a luminous orange mushroom.

After a while we broke out of the plantation and wandered along the Chesters Burn as it bubbled downstream. The water was a vivid blue, frothing white as it crashed over rocks. A piercing ‘zrik!’ cut through the rush of the river and we all turned to spot the white-breasted bullet speeding down the watercourse. Sure enough, a dipper zoomed into view, wings a frantic blur. Perhaps less regally dressed than its neighbour the kingfisher, but still a charismatic and highly specialised little fisherman.

By now the sun had sunk out of view and the landscape dulled in colour, the familiar dusky haze settling over our surroundings. Heather told us about an expression that perfectly described this time of day: entre chien et loup, meaning “between dog and wolf”. In dim twilight, our eyes have to work harder to distinguish shapes, perhaps mistaking a harmless dog for a slightly more intimidating canine! Up in the Cheviots though, there were no monsters hiding, so it was enlightening to see what was venturing out at this time of day.

Once we’d made the ascent back up the hill to the bothy, the moon and stars had dominance of the sky. There were a few wispy clouds, but mostly the horizon was clear, so we all retrieved hats and gloves and set up tripods in the garden for some star photography. I hadn’t had a lot of practice shooting at night, so was pleased to capture some shots of the bothy backed by the entire night sky. Getting such good views of stars was a breathtaking end to our first day in the wilderness. 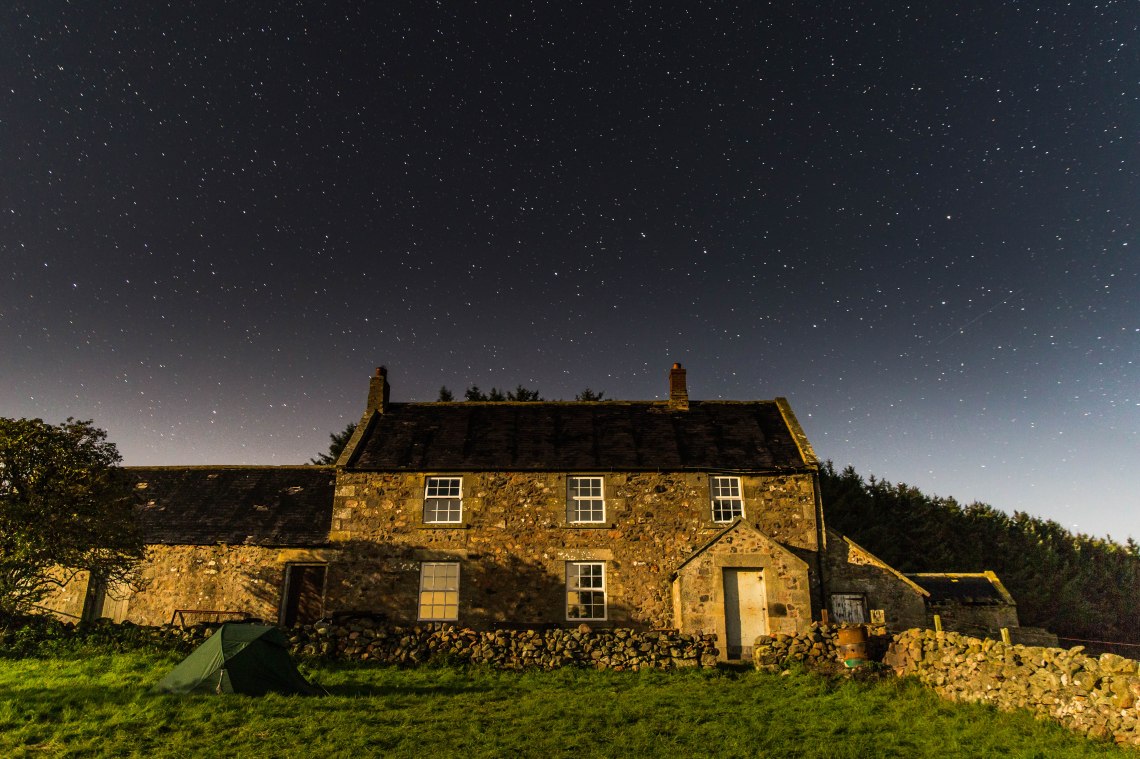