On our last day, we drove out of Burghead into Hopeman, a nearby seaside village. Once again, the sun was shining and the sky was almost cloudless, coating the sand in a shimmering golden glow. Jas couldn’t contain herself, and pulled eagerly on the lead to get down to the seafront. 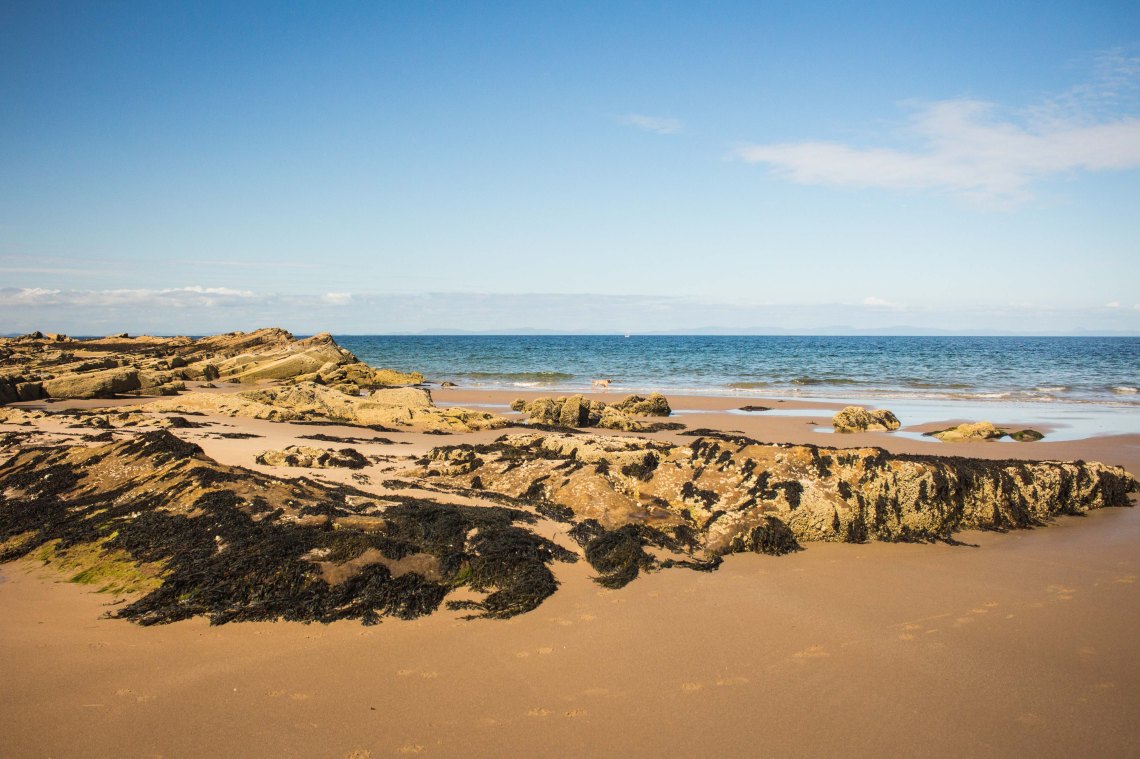 I began snapping immediately. The beach was a patchwork of fine, flat sand and weed-coated rocks where puddles of seawater were trapped from returning to the ocean until the tide swelled again. Kerr and I began to wander – rock pooling is one of those timeless summer activities that nobody is ever too old for. We stepped slowly from one rock to the next. A combination of slick seaweed and soft moss made me take extra care; although it was a beautifully warm day, I feared a dip in this water would still be a chilly one.

Another reason to watch your feet was the abundance of common limpets (Patella vulgata) clamped firmly to the rocks. We kept an eye out for any crabs lurking in the shadows, but perhaps the day was too hot for them. However, there were plenty of hollowed-out crab shells and discarded legs; remains of somebody’s breakfast no doubt.

There were also several rusty red spherical bodies with tiny tentacles tucked up tight. After a little research I discovered that they were beadlet anemones (Actinia equina), an extremely territorial anemone that nudges and attacks rivals with stinging cells that act like harpoons, injecting the unfortunate neighbour with venom to clear them off their patch. Baby beadlet anemones are kept in the parents’ body cavity – which conveniently serves as both mouth and anus – and when they are ready to be born, the parents eject them through the water, where they find a rock to make their home.

After a long time spent gazing into the pools and wondering what else could be lurking just out of sight, we joined the frantic game of fetch that was in full swing back on the beach. I couldn’t resist an opportunity to test my reflexes and see if I could photograph the fluffy torpedo in any mighty poses. I captured some absolute corkers but this was by far the best. Never has a dog loved the beach more than at this moment.