The gloom that had settled over the Cairngorms earlier in the week was long gone. As we pulled into the car park I leant forward and saw sunlight pouring through the coniferous canopy in diagonal slants, turning green needles shimmering gold. Another forest to explore! I couldn’t wait.

Once all members of the convoy had arrived, we gathered around the notice board. Abernethy was the second largest nature reserve owned by the RSPB, spanning 140 square kilometres. It was home to around 5000 species – a list that grows every year. Our guide, Simon Pawsey from the Bird Watching Wildlife Club, looked up the crested tit on his Collins Bird app – something I definitely need to get at some point – and quietly played us the bird’s call: a rapid trilling that I was sure I would be able to distinguish above the chaffinch’s constant rambling, as lovely as that was.

As Simon continued to tell us all about cresties, a small bird caught my eye a few dozen feet away. Lifting my binoculars, I focussed in and nearly disregarded the bird as a coal tit, which was exceptionally common in the local area. But then I noticed a peculiar tuft of feathers on the bird’s head. Surely not… A halo of light fringed the bird’s body and I squinted to make sure, keen not to make a fool of myself in front of all the other birders. But it was! It really was a crested tit! I exclaimed this to the group, embarrassed about interrupting Simon but deciding it was well worth it.

There was a flurry of excitement as we all pinpointed the crestie for those who hadn’t spotted it. The bird was perched on an obvious branch in a relatively open clearing, sitting at eye level in a car park full of human voices and slamming doors. It was such a good view of a species that I thought I’d only get a snatching glimpse of at the very top of a huge Scots pine, if that. The crestie stayed for a few minutes, allowing us all to admire him before he took off and disappeared. Our guide had been talking about crested tits and a crested tit appeared for us all to see, almost like a “Here’s one I prepared earlier” moment. What an extraordinary start to the day!

Buzzing after our first sighting, we set off into the forest, keeping an eye out for crossbills or red squirrels that might be foraging above. Several times a pair of dark wings high above had us briefly excited that we’d spotted an eagle, but each time it was a buzzard, or “tourist eagle” as it was often referred to in the Highlands.

Before long Loch Garten came into view, and even with just a glimpse through the trees I knew it was going to be impressive. There was no breeze to stir the water so the loch lay as flat and still as a mirror, casting a perfect reflection of the trees along the margins and the blue hills in the distance. The only disturbance to the glassy surface was a lone mallard swimming far out in the loch, scratching a line across the water. Not a sound could be heard. As I stood on the bank absorbing the view, I thought how Loch Garten could be the perfect setting for an elaborate fantasy story. It was such a wild, beautiful place: seemingly tranquil and calm but with the power to turn at a moment’s notice. 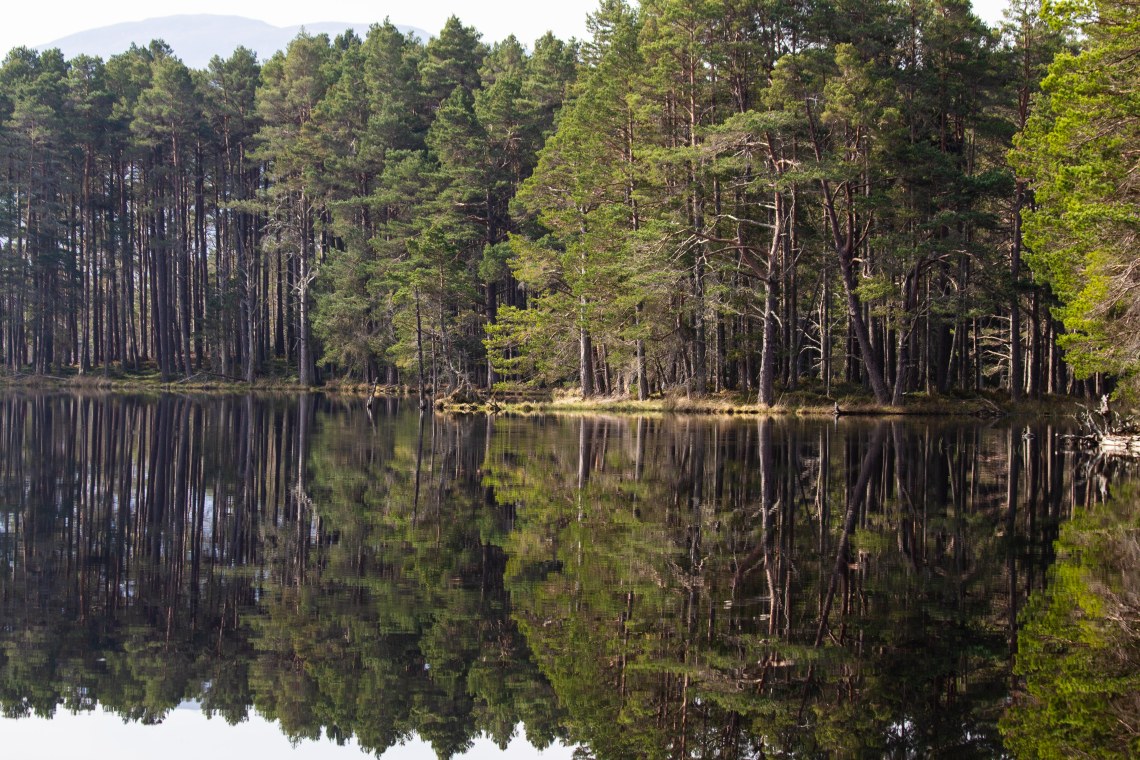 If I’d been alone, I would have sat by the loch all day, but I was here for birding with the group so reluctantly took my last few photos and followed them further along the trail, skirting the edge of the water. Sure enough, we found a red squirrel, although the animal was trickier to see than on the feeders in Anagach Woods back at the hotel. A bright orange mammal is surprisingly difficult to spot in dense green foliage, and it was only its sudden movements that gave it away.

After a while another loch came into view: Loch Mallachie. Here we were met by a gaggle of greylag geese as they glided across the water. This part of the reserve was marshier, and not far from the land we were stood on was a smaller island with far shorter trees. Simon explained that they were the exact same type as the giants that surrounded us on dry land, but because of the variation in soil quality and nutrients, the same species was half the size only a few metres away. 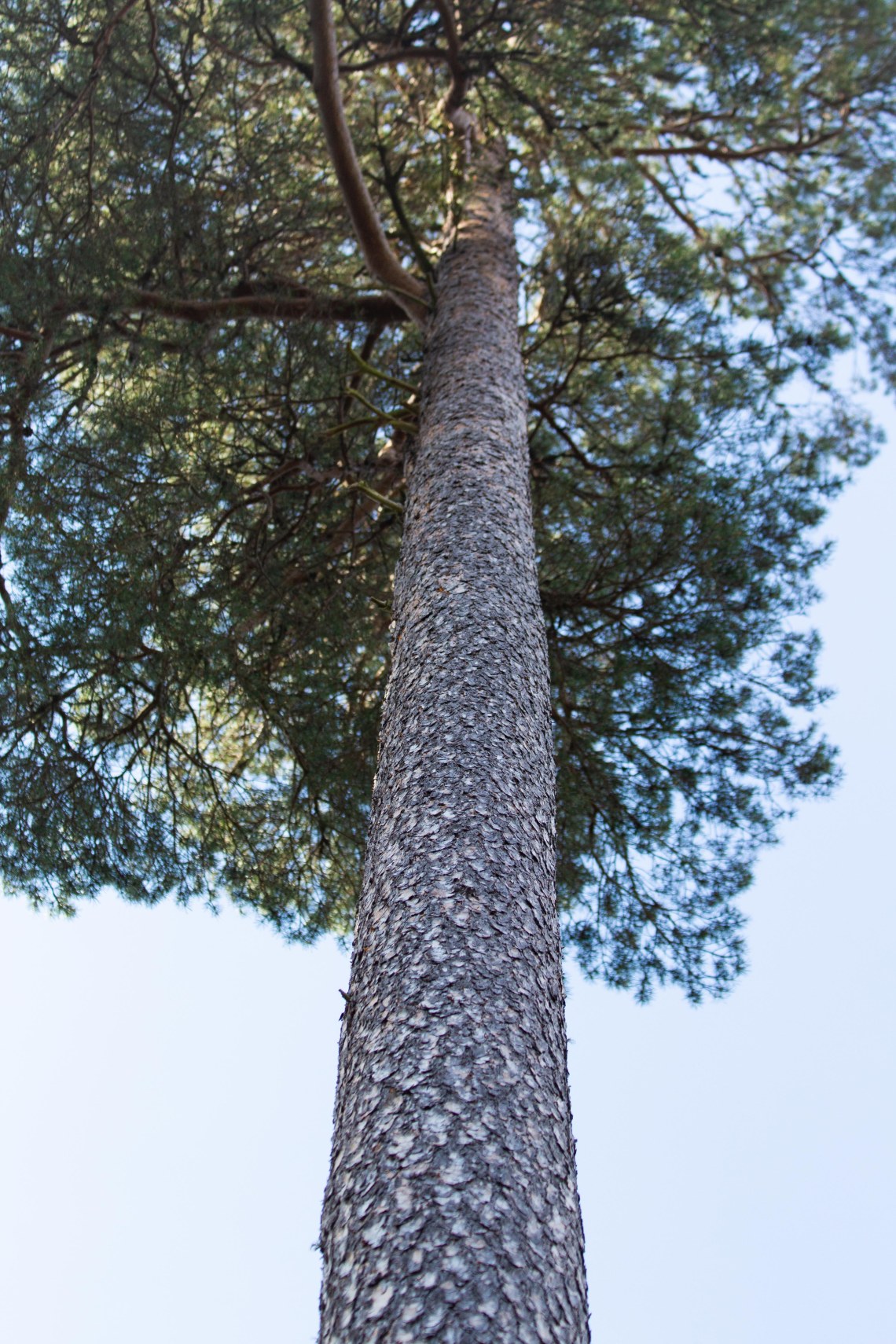 Suddenly one member of the group pointed out two dark specks on the horizon. I prepared myself for the inevitability of more buzzards, but once Simon had set up his scope I heard some very satisfying words: “Those are eagles”.

Everyone rushed towards the bank for a better view. The birds were very far off – tiny pinpricks on a white horizon – but sharp-eyed Simon could make out white patches on one of the eagles, suggesting it was a juvenile. After a while scanning empty sky I managed to locate them in my binoculars. They glided seemingly effortlessly at a dizzying height, barely moving their wings as they soared through the thermal currents. It was such composed flight: the movement of a creature that dominated its landscape. Fortunately, the eagles were flying closer, so one by one we had a peek through Simon’s scope. When it was my turn, I was thrilled to make out the bird’s head and beak even from such a distance. I’d seen a golden eagle once before on the west coast, but this was by far the clearer sighting. Eagles were the true celebrities of Scottish wildlife, and to see two at once was so special.

The eagles soared in large circles for a while before gliding further out of reach of our scopes and binoculars. Once again the group was buzzing. I couldn’t believe how lucky I’d been this week. After only four days in the Highlands I’d seen crested tits, crossbills, red squirrels, a pine marten and now two golden eagles. It reminded me of the importance of patience but also of luck; how being in the right spot at the right moment can bring unforgettable experiences. Being from the southeast where wildlife is far less abundant, I would treasure the sightings I’d had this week for a long time.