After sharing the waves with a herd of very curious seals, it was now time to get changed on a boat with thirty other people. This was a challenge, especially as getting a wet wetsuit off required the flexibility and strength of a contortionist. I teamed up with another girl to make a temporary changing cubicle, which made it somewhat easier.

Once everyone was back in dry clothes, the boat headed to Staple Island for a spot of birdwatching. On the approach, all we could see and hear was guillemots, a blanket of birds completely covering the rock. People were dotted amongst them but vastly outnumbered. It was the kind of ratio I liked to see. 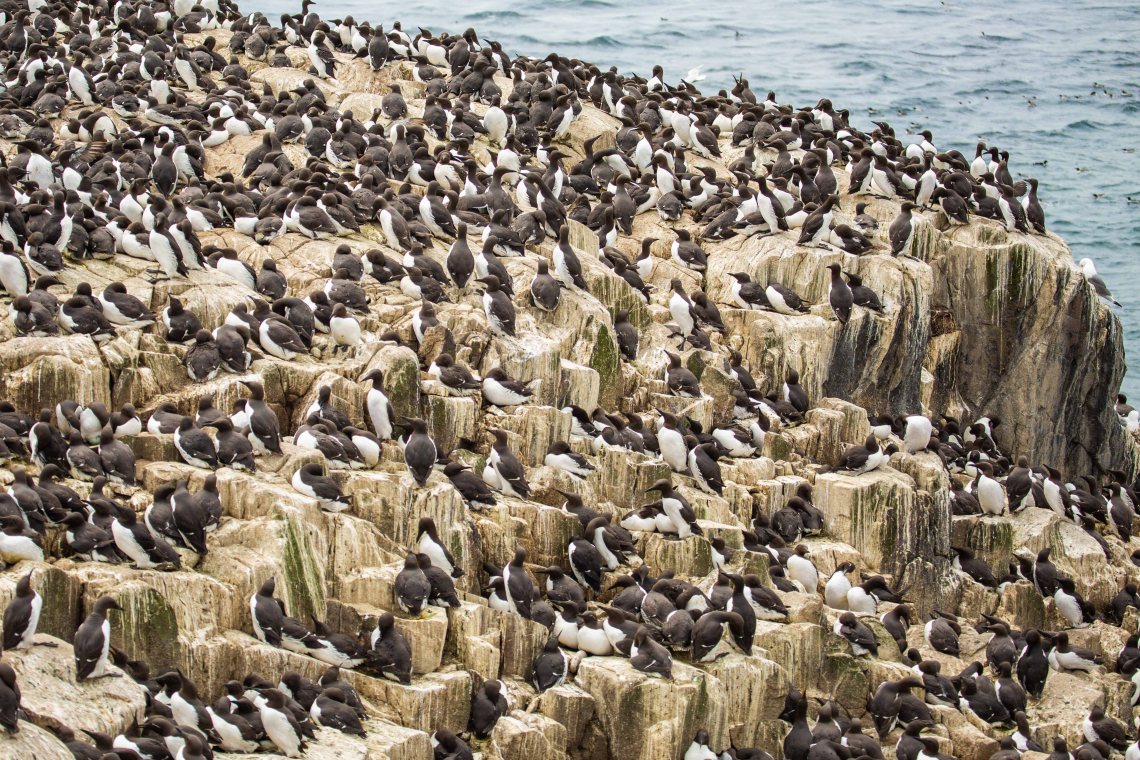 On dry land, it was impossible to decide where to start. I was used to choosing a spot to sit and wait for the wildlife to appear. Here, we had joined a metropolis of seabirds all going about their business without blinking an eye at what we were doing. Red posts were stuck into the ground at places, and as we passed I notice each one signalled the presence of a nest, some situated almost on top of the path that threaded through. Shags watched nonchalantly as we passed, eyes half closed.

Some of the guillemots looked different to others. While most had completely brown heads, a select few had bright white rings around their eyes. I asked Cain, who told me they were bridled guillemots. Back at home I looked them up, and discovered that these individuals are an example of dimorphism. Usually relating to variety in plumage colour, dimorphism is the existence of two distinct forms within a single species. This is different from two subspecies, as both guillemots and bridled guillemots have the same Latin binomial: Uria aalge. Were they subspecies, they would have an additional subspecies name. Furthermore, subspecies tend to be permanently geographically isolated from one another.

After watching the guillemots for a while, I found where the puffin clique spent their time. Away from the larger birds, there were countless burrows in the grassy banks, and after a while puffins would pop into view or land and duck inside, sometimes carrying large mouthfuls of sandeels in their vibrant bills.

I had been so excited to see my first puffins on the Isles of Scilly, and while I still treasured the memories, those had been distant sightings compared to now. Here on the Farnes, puffins sat twenty feet from two-tiered photographers, lying on the rock or glancing from side to side with their sad clown eyes. They were a joy to watch, and so much smaller than people think! 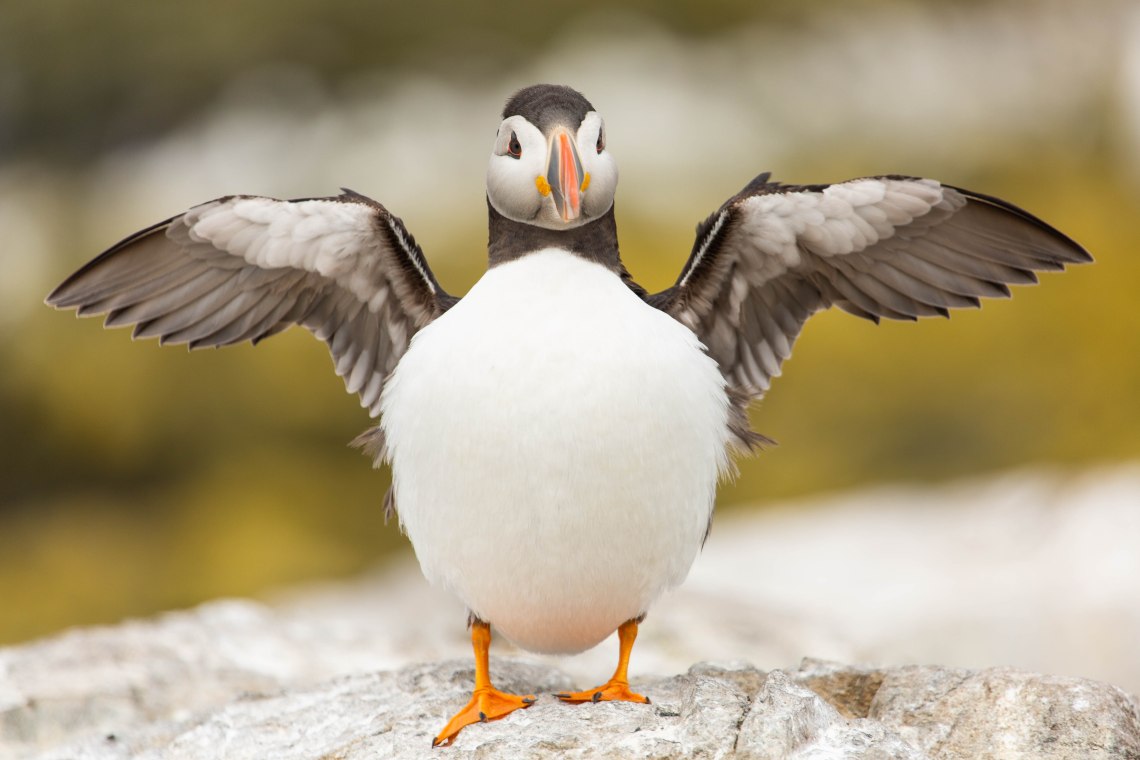 Sadly, the time flew by and before I knew it I was back on the boat and leaving Staple Island behind. When we arrived into Seahouses, I caught the irresistible smell of fresh doughnuts on the breeze. Tired after the swim, I made a beeline for the van and bought a bag to sit and eat on the bay. A group of very tame eider ducks approached, eyeing my bag with enthusiasm. Unfortunately for them, I wasn’t sharing my doughnuts with anyone, but I did make use of the opportunity to photograph the beauties so close.

I was thrilled to see ducklings accompanying some of the females, perhaps one of the cutest baby animals there is. As the females lowered their bills into puddles of seawater, the ducklings copied, mirroring the adults’ every move. Watching such intimate family behaviour while I devoured my doughnuts was a perfect way to end such a dramatic and unforgettable day at sea. 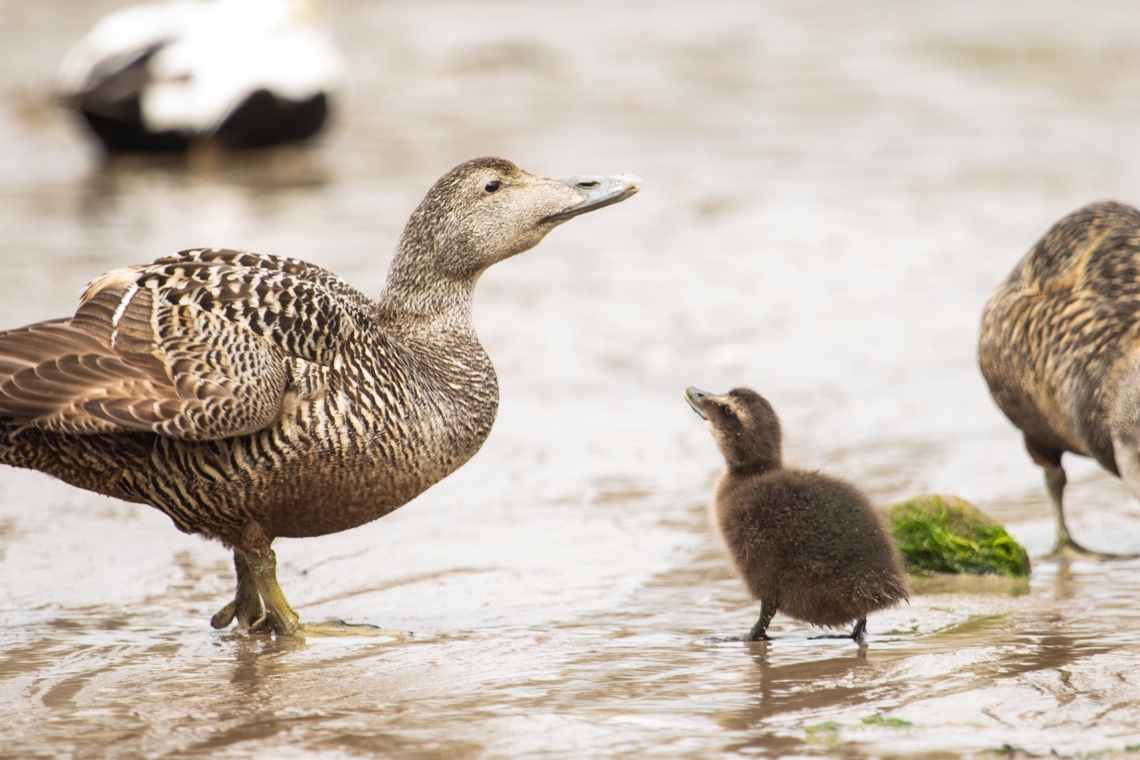 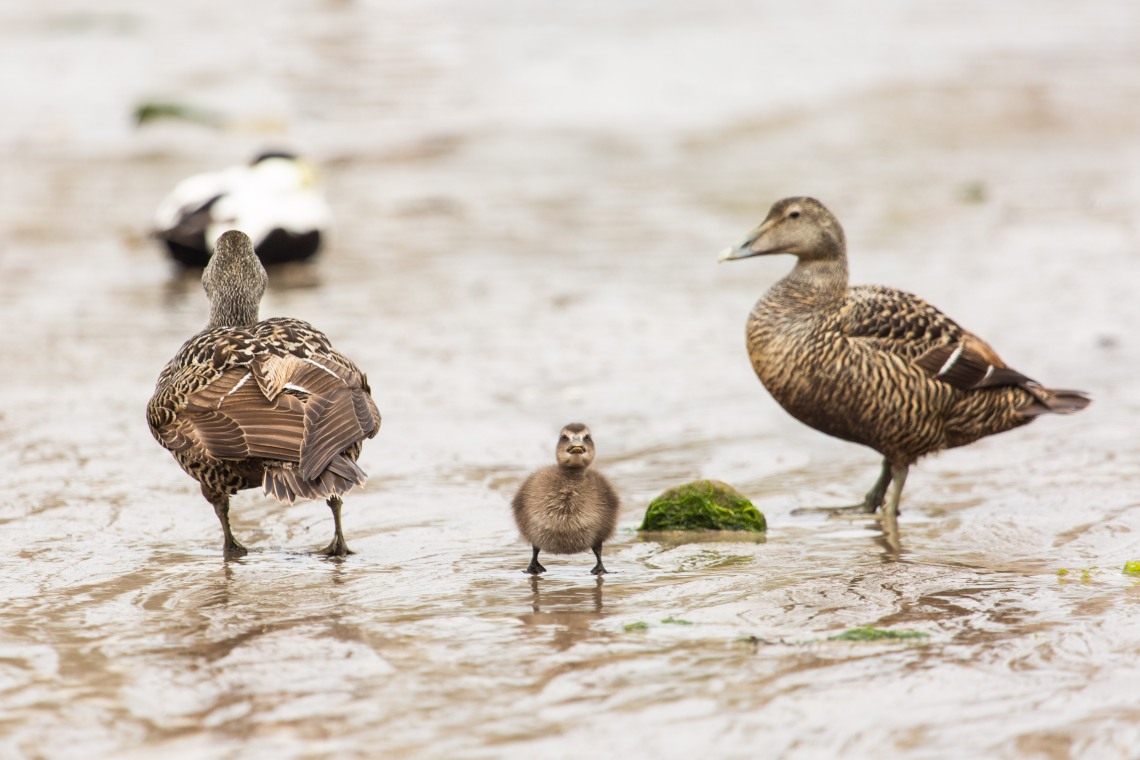