Almost all of the natural habitats that can support life are inhabited by fungi. While some species are only found in particular habitats, such as Black Bulgar (Bulgaria inquinans) on oak wood and Purple Jellydisc (Ascocoryne sarcoides) on beech, other species can thrive in many different types of habitats – coniferous woodland, broad-leafed woodland and heathland to name a few.

Autumn is one of the best times to see fungi in its prime. September rains bring the varied and often vibrant fruiting bodies out of the leaf litter and into the open. With a broad range of habitats and often wet weather, Cumbria is a fantastic location for finding fungi. I set out to several different locations to record the species that were in fruit at this time of year. Identifying them can be a challenge, so I enlisted the help of Paul Nichol from the Cumbria Fungi Group to help me with the trickier varieties. After just a few walks I’d seen dozens of species of different colours, shapes and sizes. Of these, there were four that stood out: the Common Puffball, Ochre Brittlegill, Sheathed Woodtuft and Artist’s Palette.

With a season spanning from July to November, the Common Puffball can be seen regularly in a broad range of habitats, from the leaf litter of broad-leafed, coniferous or mixed woodland to pastures and heathland. Although these Puffballs can be seen growing individually, they are frequently found in groups.

Young specimens are white and covered with tiny, pyramid like spikes all over the spherical cap. As the Puffball ages, its flesh begins to turn brown, and mature specimens have a circular hole on the top, which is used to release the spores in a ‘puff’ of brown powder.

Common Puffballs range in size and shape; while some are small with a stem that is barely visible beneath its low-lying cap, others grow larger with a thick stem sometimes reaching 9cm high.
I’d seen puffballs before, but never one this size; the stem was around 7cm long so the fungus protruded high up out of the ground. There were other Puffballs close by, though the stems of these were barely visible and hidden beneath the cap.

The Brittlegill family is an extensive one – there are over a hundred species in the UK alone. Of these, almost all have white gills and stems. The gills of this group are particularly interesting because they’re not varied in size with some small and some long, as is common in a lot of mushrooms, but all stretching from the stem to the edge of the cap in a uniform arrangement. While some are edible, others can make you very ill indeed, the Geranium Scented Russula (Russula fellea) being the nastiest of these.

Every tree you see will have a fungus growing on it somewhere. While some species are parasitic, there is often a very heart-warming relationship between the two. When a fungus grows on the root tips of its tree host, it is nourished by the tree’s photosynthesis. In response, the fungus absorbs the minerals produced, and passes on the excess back to the tree via its roots. This is an example of symbiosis between the tree and the fungus, where both species are benefitting from the interaction.

I’ve seen quite a few Brittlegill now. This one is Russula ochroleuca, the Ochre or Yellow Brittlegill. With a bright yellow cap and snow-white stem, it’s an extremely pretty mushroom, but with a distinct peppery taste so is not usually eaten. This chilli taste is typical of several varieties of Brittlegill, and can be used as an indicator of its species. 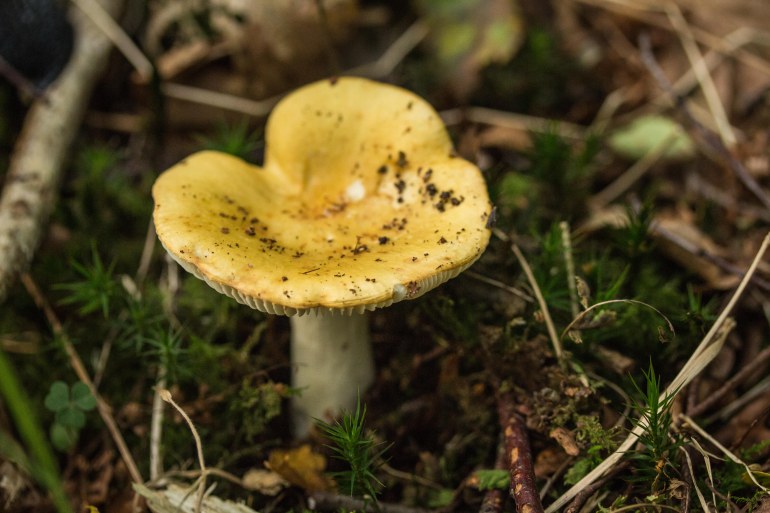 This impressive-looking mushroom is one of the largest I’ve seen, and stood proudly with its troop amongst the nettles. After first consulting my fungi guides, I thought I’d found Velvet Shank (Flammulina velutipes). The bright orange, two-toned colour was consistent, along with the trooping. However, this mushroom was a lot waxier than the specimen I’d found, not to mention the size difference. While Velvet Shank stems can reach 10cm in length, these mushrooms were nearly double that. Stumped, I showed my photos to Paul, who informed me that in fact I’d found the tufted toadstool named Sheathed Woodtuft (Kuehneromyces mutabilis). Halfway down the stem was a clearly visible ring, which is present on a lot of mushroom stems, and is a mark of its development. When the fungus first emerges above ground, the cap is ball-shaped and attached to the stem. As it grows, the attachment breaks and the cap stretches into its mature umbrella shape, leaving the ring mark behind. 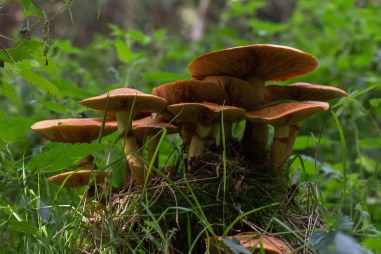 The Bracket family of mushrooms is a peculiar one, and quite often seen climbing trees in a ladder-like fashion. This particular troop of Ganoderma applanatum, or Artist’s Palette, was very impressive. A parasitic species with a creamy white pore surface and a red-brown upper surface, the fungus takes a host tree and slowly depletes it of nutrients, until it eventually grows on the deadwood alone. The vast slabs were longer than my hand and extremely tough. The fruit body grows perennially – producing new spores from the same fruiting structure over multiple years, as opposed to one (annual) – and the spores fall as a fine, rusty brown powder. This means it is essential for the Artist’s Palette to grow horizontally, to ensure maximum spore dispersal. Some of the individuals we saw lower down the tree were covered in a brown snow of spores from the brackets above them. 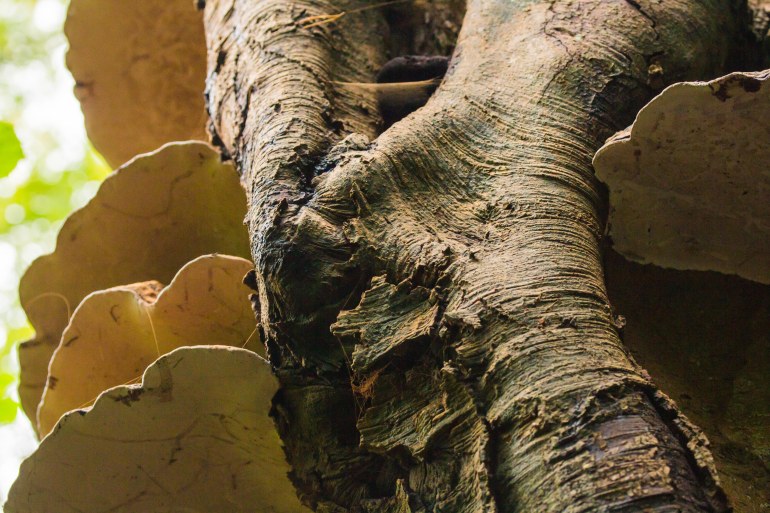 After just a few weeks studying fungi in Cumbria, I’ve seen just how many species there are to see, from vast, hard Brackets to tiny, squishy Puffballs. With plenty more chilly autumn days to come, I can’t wait to see what else begins to emerge.