The day began with waking up from a heavenly night’s sleep – my bed was like a marshmallow. After breakfast and a dip into what Heather calls THE Beaver book, by Andrew Kitchener, we headed back along the river to find some spots to set up camera traps.

The sun came and went, bringing its heat with it so I couldn’t make up my mind whether I wanted my coat or not. Every so often we’d see a different coloured spot in the sea of green grass, and I spent a lot of the afternoon squatting in the grass training my macro lens on day moths, flies and beetles. Before long we reached a clearly trodden corridor in the grass that snaked down to the river. We followed it down and saw a defined mud slope leading into the water; this was a sure route for beavers. One camera trap set and ready.

We set the other two on the other side of the river, to hopefully catch any beavers coming down from the adjacent field like the one we spotted last night. Beaver footage would be incredibly exciting, especially during the day.

Back at the cottage, we retrieved the moths that Heather and Cain had caught in the traps during the night. Taking them outside, we had a little macro photo shoot. White Ermine, Poplar Hawkmoth, Large Yellow Underwing, all beautiful, delicate creatures with easily the same beauty as butterflies. Seeing them up close instead of zooming around my head in the shower made a world of difference; stood still they were stunning, covered in shimmering dust of every colour imaginable.

After some lunch at the cottage we headed back out, this time with nets and white trays ready for some pond dipping. I hadn’t pond dipped since I was tiny, so it brought back a lot of memories for me. 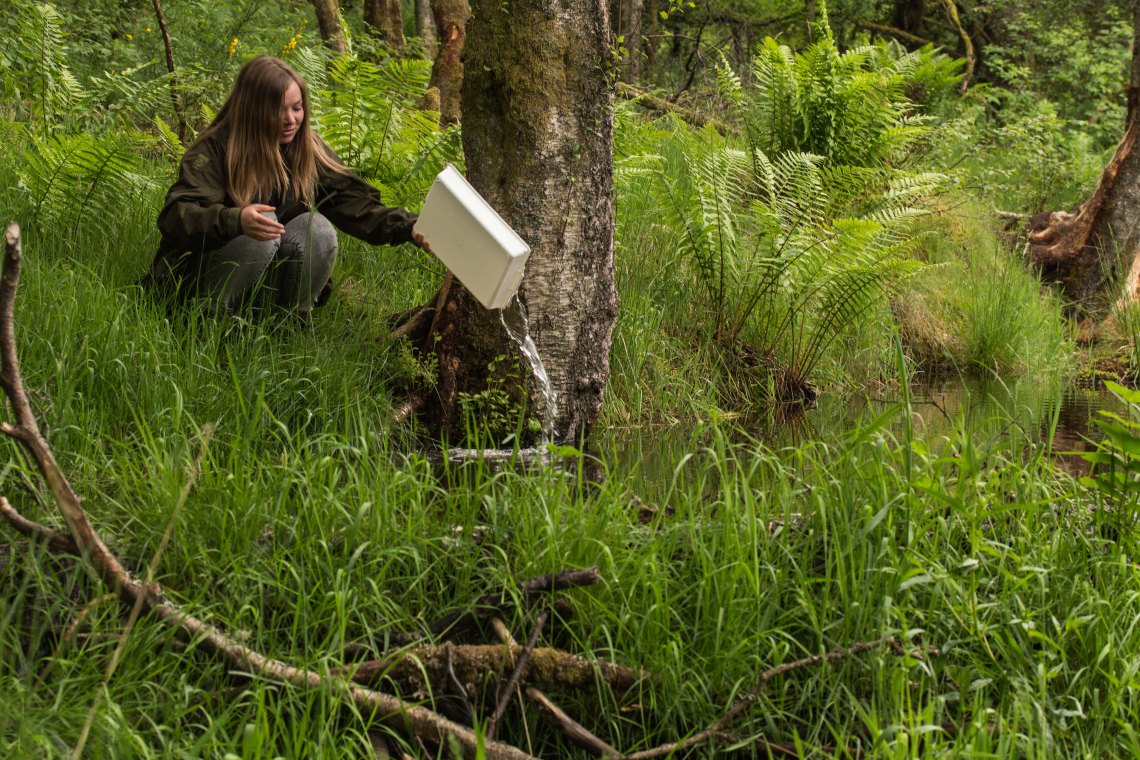 Finding the perfect dipping spot was difficult. The first place we tried was too steep, and knowing my balance I’d have fallen straight in. The next spot we found was good for dipping but we only managed to find a few blood worms, miniscule grains of wiggly sand that catapulted themselves around the tray with curled convulsions of their tiny bodies. Finally we headed away from the cottage towards the lake – made entirely by the beavers I hasten to add – where we had much better luck. In a single tray I got a good look at caddis fly larvae, damselfly nymphs, backswimmers (which performed their rather comedic backstroke around the tray), water beetles and lots of microscopic creatures. Using my macro lens I could capture the beautiful detail that make these pond aliens so extraordinary. They honestly looked like visitors from another planet. 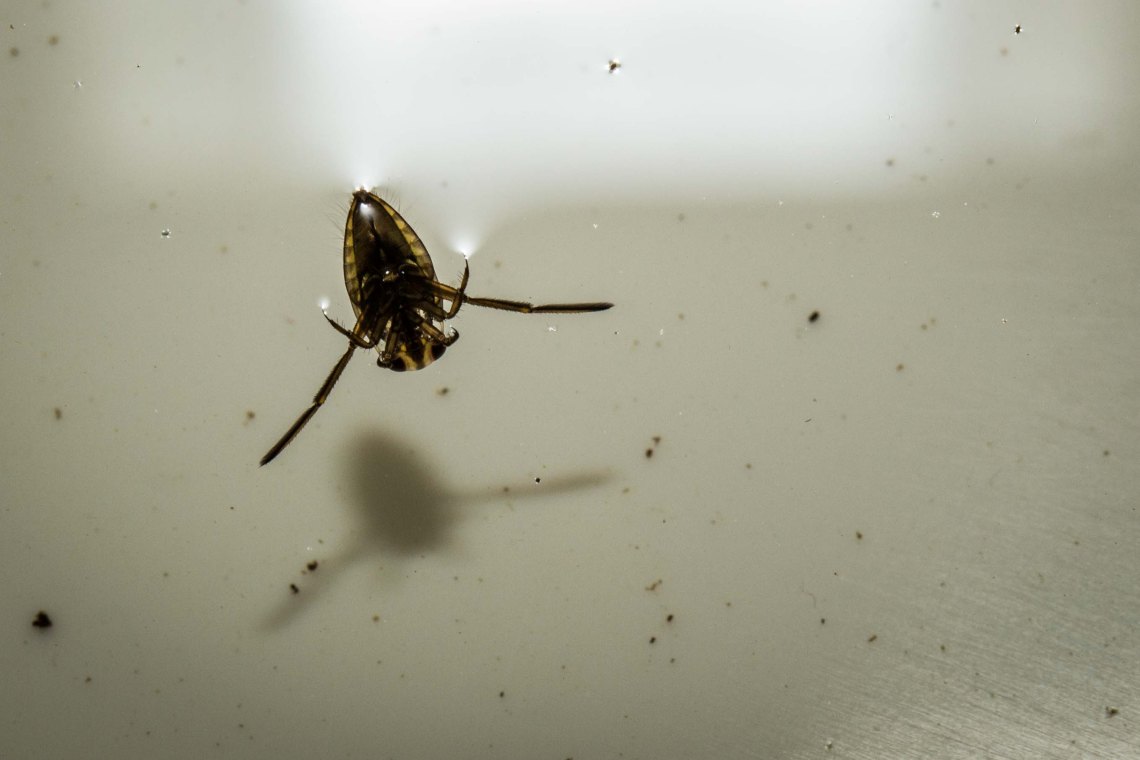 There were even more treats on the journey back. Just as I was ducking under a low fern I saw a flash of chestnut red and my arm rose of its own accord in a rapid point. “Squirrel!” I whispered as urgently but quietly as I could. The squirrel darted along a felled tree then up a living one, skirting up the bark just as easy horizontally as vertically. A group of chaffinches began to mob it, clearly too close to a nest. Bounding from one tree to the next, the squirrel speedily made its way away from the ruffled birds, and paused to peer down at us as we gawped. A tail twitch later and he was down on the forest floor again, disappearing into the forest.

We continued on, making our way back to the cottage. Dinner was stir-fry, and after finishing up we headed to the river, in the hope of seeing our beavers again. We took cover under the overhang of a tree, nestling in amongst the roots that divided us like the arms of cinema seats. Then we lay in wait. And once again, after only a short wait there was a rustling beneath the rhododendrons and a dark shape emerged. It was too dark for photos, but just to see the beavers only a short distance away was yet another treat. Now all we had to do was return at sunrise. 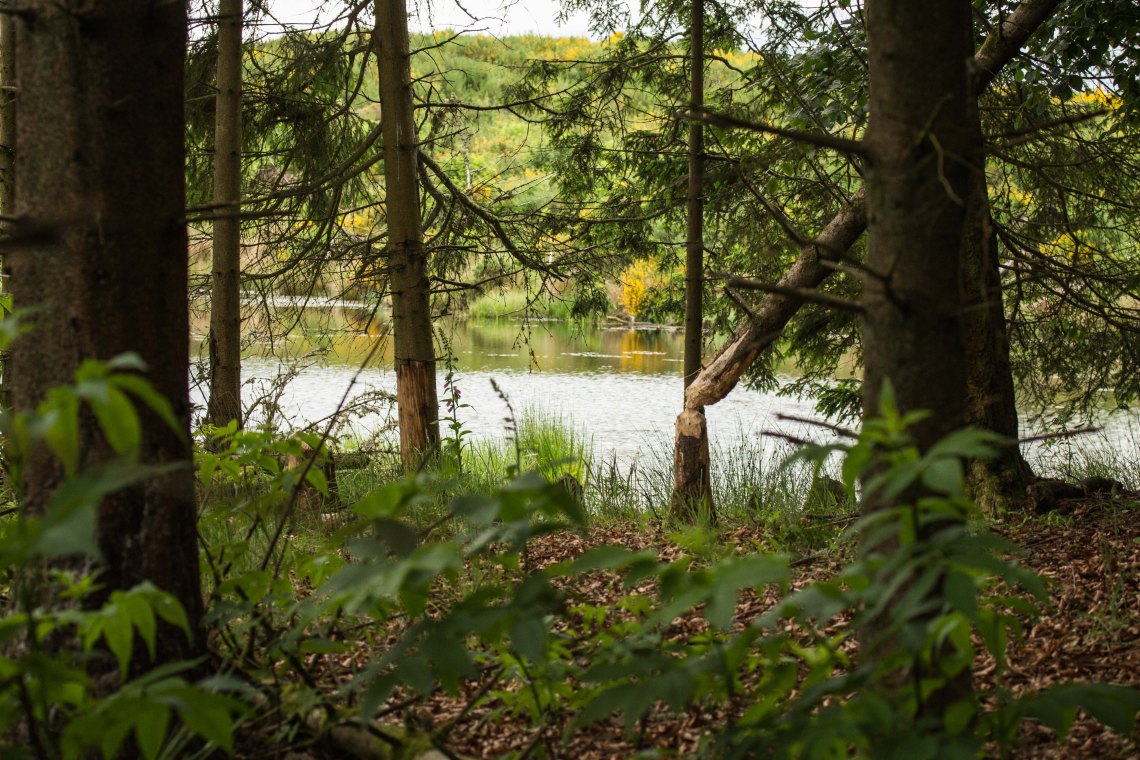