Our meeting point was a narrow track just outside Aviemore. The light was beginning to fade and the moon shone in a clear sky, fringed by a sprinkling of stars. We threaded our way up the track, keeping an eye out for roe deer in the surrounding fields, and eventually reached the hide: an impressive building with large windows running along each side. The interior was luxurious; carpeted flooring, posters adorning the walls and above all, heating! It was indulgence that I hadn’t had the fortune of experiencing in a lot of hides. This one was positively posh.

Once inside, there was the habitual jostling for the best space as politely as possible. The guide always says that the animals may come from any direction, but we all know some spots are usually better than others. After we were all settled, our guide James left the hide to distribute the food. He explained the importance of only providing a supplement to the animals’ diet to make sure they didn’t become reliant on human assistance. On the menu tonight was a selection of peanuts, raisins, dollops of peanut butter and the ultimate prize: an egg.

So what were we hoping to see at this time of night? To Victorian gamekeepers, they were the “scourge of the glen”, known for stealing the eggs and chicks of ground-nesting birds. In my opinion, they were on par with the unicorn – a creature so stealthy and elusive that although they’re relatively common in Scotland and doing well there, they are very rarely seen. Coming to a hide dedicated to seeing them is your only semi-reliable chance, but of course nothing about wildlife is ever guaranteed. I’m talking about the pine marten.

A member of the mustelid family with otters, stoats and weasels, pine martens are cat-like and forest-dwelling. Their coats are a rich, chocolate-brown and each animal has a unique pattern on their bib ranging in colour from yolky yellow to almost white. Pine martens are adept at dispatching grey squirrels, which are slower and less agile than reds. The latter have evolved alongside martens and know how to evade them, which is why there are no grey squirrels in the Highlands and plenty of reds. It’s interesting to think that if pine martens had been abundant across the whole of the UK when grey squirrels were introduced in the 1870s, would we have such a drastic problem with this invasive rodent today?

Once the food was in place, the wait began. Not only were we hoping for martens but also badgers, owls, a deer perhaps. It was a complete lottery, which made the whole thing incredibly exciting. The light was fading fast and my camera struggled to cope. Cranking up the ISO caused a sandstorm of grain to fill the screen, but I wasn’t planning on prize-winning photos on this occasion. This was one of those times when, more than anything, I wanted to watch.

After a short while we had our first visitor. Out of a knot of tree roots came a wood mouse. It appeared as though time had been sped up – the mouse zoomed out into the open, seized a peanut and retreated into its shelter within what seemed to be the blink of an eye. He or she entertained us for a while but before long it was quiet again.

Gazing outside into the dark clearing roused a slight feeling of unease. The longer I looked, the more my eyes played tricks on me. Shadows took on the appearance of strange shapes appearing to move on their own. Coupled with the expectant silence in the hide, the scene was close to eerie.

My eyes kept flicking to a shadowy patch just out of reach of the yellow spotlights. Beyond it the ground dipped into a shallow hill that plunged into complete darkness. I kept picturing a marten cresting the hill and trotting along the track for the tempting egg. I thought if I imagined this hard enough, it just might happen. I appreciated this fantasy had an undeniable whiff of desperation about it.

Suddenly, a flash of pale wings caught my eye. I glanced up and watched a scene unfold in slow motion. A bird catapulted through the air, wheeled tightly around the mouse’s tree and swept straight past the window. A blink-and-miss-it moment. For a few seconds I was stunned. I’d never seen a tawny owl before, and couldn’t believe how small they seemed! Small, yet incredibly skilled hunters. It really was a privilege to get nocturnal wildlife encounters, especially scenes as dramatic as a high-speed fly-by from a tawny.

After that exciting moment, there was a distinct lack of life for quite some time. It was still early days, I reminded myself, eyes flicking once more to the shadowy patch, there was time yet. I leant forwards on my stool, peering so close to the window that my breath fogged up the glass. Martens could approach from anywhere, and being so dark they would be completely concealed apart from their trademark bib.

The other visitors coughed, switched seats, paced up and down and chatted in hushed whispers. Meanwhile, I was glued to my stool. Far from blessed with social prowess at the best of times, I refrained from making conversation and kept my eyes planted firmly outside – there was no way I was missing anything.

There was a sudden, hushed commotion in the hide and I peered to the side to see a badger had appeared. Badgers have terrible eyesight but an exceptional nose, and mainly use smell to discern their surroundings. The animal picked her way across the grass, fanning her snout over the ground like a metal detector. Tragically, my previous badger experience consisted of road kill and one that I had nearly killed myself when it ran out in front of my car, so to watch a real, live badger going about her nightly business mere feet away was such a treat.

After she’d polished off most of the nuts, the female was joined by a male. He was the same size, suggesting he was also the same age if not younger. Adult male badgers typically weigh a kilo more than females and are noticeably more muscular. The two animals completely ignored each other so there was no doubt that they belonged to the same clan. If they hadn’t, there would have been a serious standoff. The male cleared up what the female hadn’t found and one by one they left the way they’d come. The only evidence of their visit was a distinct lack of peanuts.

An hour and a half later, my enduring optimism was beginning to turn. I was conscious of the time and that our evening would eventually come to a close, marten or no marten. I started seeing more and more phantom animals out in the gloom. The moon was radiant and my eyes were drawn to its pure white hue. A lone bat darted over the roof of the hide, silhouetted briefly against the lighter sky before disappearing. How anyone got a decent photograph of a bat eluded me. To capture such erratic and rapid flight was seriously impressive.

I glanced over at the shadowy patch again and saw a pine marten staring back at me, beady eyes glinting in the light. My insides jolted and as quietly as could I exclaimed, “There’s one!” Everyone knew exactly what I meant and came hurrying in my direction with barely restrained urgency. I couldn’t quite believe what I was watching on the other side of a pane of glass.

James told us the marten was a female. Similar to badgers, males were larger and typically had broader faces. Many people underestimate a marten’s size when they see one, imagining something along the lines of a weasel or stoat. I was quite the opposite; the marten was smaller than I’d expected, smaller than most house cats. What couldn’t be disputed was how beautiful she was with her long bushy tail, sleek mocha fur, tiny button nose and white-rimmed ears. I fell instantly in love.

The marten crossed to the other window and we swiftly followed suit. She climbed up onto the table and munched through the peanuts. As stunning as she was, she certainly wasn’t the most ladylike when it came to eating. She took the egg in her mouth and, despite her sharp teeth, carried it delicately down the table onto the grass. After a quick readjustment, she lolloped out of sight. 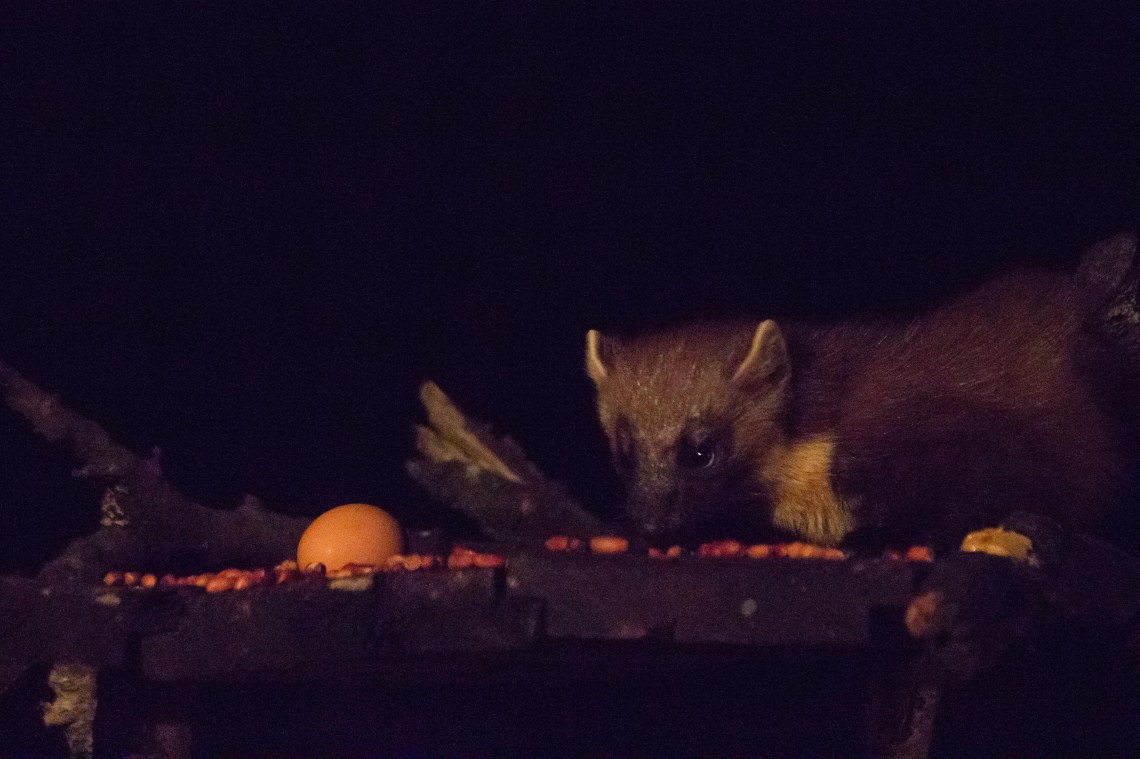 We’d spent two hours in darkness and experienced less than a minute of what we’d travelled here to see, but the atmosphere in the hide could only be described as barely contained hysteria, in my corner at least. We made the unanimous decision to end our evening on a fantastic high. Not only had I had my first proper badger sighting, but I’d also seen a Scottish icon. I couldn’t have hoped for better.

5 thoughts on “The Scourge of the Glen”